DomoAnimate, or stylized as Domo Animate, was an animation/video-sharing website powered by GoAnimate for Domo Nation.com. This particular site enabled users to publish custom GoAnimations with very funny featuring characters from the Domo shorts. Characters from original GoAnimate themes such as Cartoon Classics, Monster Mayhem, Festive/Seasonal, and Stick Figures were also included. In August of 2014, the admins of GoAnimate announced that the DomoAnimate site would shut down on September 15, 2014 and all the DomoAnimate videos and accounts would be deleted.

Unlike GoAnimate, this site included the following features:

A user has the ability to import any desired picture(s) to the Domo Slideshow creator. The pictures would then serve as the main characters in his/her videos. If any users are stuck, a tutorial is provided.

On Domo Animate you could enable copies on your animations, this was removed from GoAnimate in 2011 for unknown reasons

Below this paragraph, is a complete list of all Domo Animate exclusive characters/backgrounds/props/etc.

Domo (どーも くん): The main character of his franchise. He has supposedly "hatched from an egg" according to eyewitnesses. He has a large, saw-toothed mouth that is locked wide open. His favorite food is a meat and potato stew known to many as Nikujaga (肉じゃが); his least favorite foods however, are apples. He usually communicates by producing low-pitched noises that apparently, his friends can understand.

Usajii (うさじい): This rabbit (who's name is a pormanteau of the japanese words Usagi [Rabbit] and Jii [Old Man/Grandpa]) is Domo's wise, old companion. He disregards new technologies or technological advances to the point where he doesn't own a telephone. His favorite food is carrots.

Tashanna/Ta-Chan (たーちゃん): She's a weasel who aspires to be a fashion model in Toyko. She is always invested in technology (tvs, phones, games, you name it). This character has a "weaselly accent" in English-language versions of Domo shorts (whereas in Japanese versions, she doesn't). She also ends her sentences in "y"s (in English versions) and "chi"s (ち) (in Japanese versions).

Hungry Bear (はらぺこぐま): This bear is quite large and powerful, but cannot take advantage of his strength due to his constant hunger. 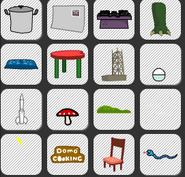 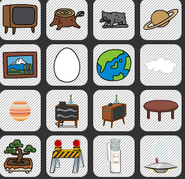 The site sadly, has retained the same layout from when it was first launched. Here's proof:

Community content is available under CC-BY-SA unless otherwise noted.
Advertisement